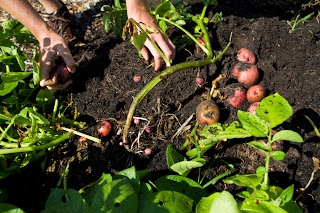 Lately there has been a lot of back and forth about the importance of organic. Is organic healthier or is it a scam to get us to spend more money? I have been reading several posts on Facebook that suggest since all produce whether organic or not has the same nutrient value, there really is no difference. The only difference in their opinion is price. What is the real cost of non-organic, mass produced produce? Should we be willing to spend more for food when the agriculture revolution has made it so inexpensive?

In Michael Pollan's book, "The Omnivore's Dilemma", he writes about his trip to a conventional potato farm located in Magic Valley Idaho;


""It was fifteen thousand acres, divided in 135 acre-crop circles. Each circle resembled the green face of a tremendous clock with a slowly rotating secondhand. That sweeping second hand was the irrigation machine, a pipe more than a thousand feet long that delivered a steady rain of water, fertilizer and pesticide to the potato plants. The whole farm was managed from a bank of computer monitors in a control room. Sitting in that room, the farmer could, at the flick of a switch, douse his crops with water or whatever chemical he thought they needed.

One of those chemicals was a pesticide called Monitor, used to control bugs. The chemical is so toxic to the nervous system that no one is allowed on the field for five days after it is sprayed, even if the irrigation machine breaks during that time, farmers won't send a worker out to fix it because the chemical is so dangerous. They'd rather let that whole 135 acres crop of potatoes dry up and die. That wasn't all; during the growing season, some pesticides get inside the potato plant so that they will kill any bug that takes a bite. But these pesticides mean people can't eat the potatoes while they're growing either. After the harvest, the potatoes are stored for six months in a gigantic shed. Here the chemicals gradually fade until the potatoes are safe to eat. Only then can they be turned into french fries.""

REALLY??? Pesticide so toxic that corporations would rather lose 135 acres of product than send a person out to the fields? And what is happening to the soil underneath that is soaking this crap in? What happens to the water that this soil runs into? What happens to the unfortunate who drinks that water? What happens to a bird that flies through to eat some insects? Common sense would dictate that when you could die growing something you are going to later eat, it's time to find a better way.

An organic potato will likely have the same nutrients as a non-organic one. That's really not the point. If we can produce food without using toxins why don't we?

Cancer, autism, ADD, ADHD, and the list goes on. We all know someone affected by something that seems potentially environmentally caused. 1 in 88 children born today will be diagnosed with autism. While science is trying to figure out the exact cause of all these awful diagnoses, why don't we eliminate the things that are potential culprits? It makes sense to grow and consume food that was made with little to no toxic footprint. It makes sense to support healthier ways to produce our food. Maybe chemicals aren't making us all sick, but maybe they are.

Potatoes are very easy to grow in containers. All you do is put the tubers in the soil, cover it with more soil, water, and a few months later, dump them out. Voila! Potatoes that didn't need six months to become safe to consume. You can grow sweet potatoes the same way. YUM.

I know organic is more expensive and not always realistic for everyone. Growing your own is an option. Also, knowing which inorganic produce to avoid is a good idea. The Environmental Working Group, www.ewc.org, lists the “Dirty Dozen” of the produce with the highest pesticide levels. They also list the "Clean Fifteen" of the produce with the least levels.

Knowledge is power. Get our there are grow something! (just not with Monitor!)

Happy Gardening,
Maggie Flynn
Posted by Patricia at 5:14 AM